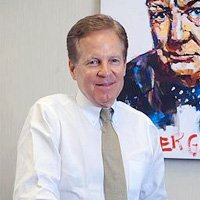 When Flock was 12, he lost his hearing in his left ear. But nearly 30 years ago, when Flock was an up-and-coming marketing manager in New York for IBM Corp., he went completely deaf.

“I had been skiing in Killington, Vt., with a couple of friends and we stayed up late playing cards, when the next morning, poof, my hearing was gone. I thought I had died. Your whole life changes like that and this wasn’t in the film of Michael Flock. I couldn’t see myself as handicapped, I was going to be a successful business executive at IBM.”

After a few weeks of treatment, things continued to look dim for Flock and the doctor was ready to end treatment. But Flock begged him for just a few more days of treatment. Then a few days later, Flock was sitting in his room when the phone rang. And he could hear it. Flock thought he was dreaming as his boss from IBM said, “How are you?”

Flock is still completely deaf in his left ear, but he has 50 percent hearing in his right.

The article goes on to Chronicle Flock’s Career and his efforts to stay on top of his recuperation and not let the hearing loss cause his performance to deteriorate or lose the ability to relate to people. It also details the events that lead to Michael founding FLOCK Advisors in 2007, which provided M&A advisory services to credit, collections, debt buying, and outsourcing business industries.

“We saw a void in the marketplace for financing debt buyers in 2008. We learned that the small middle market debt buyers were getting better returns on their capital than the large debt buyers because they had special relationships with creditors that enabled them to buy debt at prices relatively lower versus their cost.”

Flock said after the crash in 2008 all of the big hedge funds and some of the specialty finance companies that were funding debt buyers left the market because they were all losing money. As the prices of debt had plummeted, Flock wanted in when everyone else was getting out.

FLOCK Specialty Finance is dedicated to alternative funding in a variety of specialty finance segments. FLOCK’s mission is to provide clients with capital and expertise for the purchase of both charged off debt portfolios as well as for the financing of subprime consumer obligations. FLOCK has funded over 600 portfolios since 2013.

FLOCK believes its funding is “More Than a Transaction”. FLOCK’s proprietary financing structure provides growth-minded clients with a competitive advantage in multiple asset classes. Founded in 2007, FLOCK is headquartered in Atlanta, GA. For additional information, please call: 770-644-0850 or contact us today.